With a blend of modern music and the sound of soulful, old-school music by which he is heavily influenced by, Tulsa-based singer/songwriter, Calvin Loron is ready to join the list of countless great acts that have come before him.

After receiving positive feedback from public radio in the UK market on his original songs "Old Fashioned Love" and "Right Now," Calvin knew music was something he wanted to do long-term. He has performed at music festivals and on live television segments such as Creekchella Music Festival, Channel 8's "Good Day Tulsa," and Rogers State University's "Studio 66." Calvin plans to continue to make and perform music that speaks to people from all areas of life. 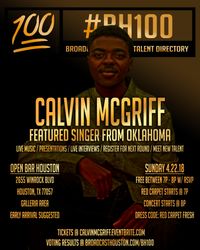